March 21, 2012
This is the little flyer that I put together to hand out at the market events that I do. When you're building a business it's these little things that really take the time to do, and eat into your cash reserves. I hardly sell any t-shirts at the markets, which isn't that surprising given the economic conditions, so money for Muddy Ground is a bit tight. These flyers I did for an event in Kingston-upon-Thames, and the cost of printing them up was more than I took in sales that day. And after having gotten them printed up, I now wonder as to the economic sense of places just handing them out to any and everybody. Literally it's giving money away; which would you Dear Reader prefer - a flyer or a dollar?

On the positive side, I now know a lot more about the printing business than I did before, and now understand how to produce these things. Oddly enough it's kind of fun to do. This particular one I wanted to look as though I'd hand written on a photograph of the Zombies in action. It was deliberately designed to look urban, a bit underground and unprofessional. You can't have anything to do with Zombies looking too commercial now can you? 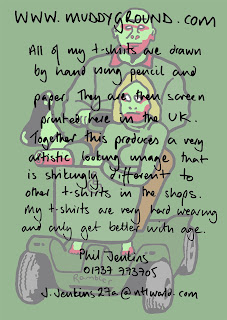 All of my t-shirts are available from either www.muddyground.com or my Etsy site over in America. At the moment I'm doing worldwide freepost as a promotion - and believe me, my t-shirts do go all over the world. I like that; the idea of some guy in Colorado or Sau Paulo wearing something I've had put into production. That's a really fun notion.﻿