I didn't go for a ride yesterday. Day trip to Hastings beach.

March 05, 2012
During the week my wife was getting a bit bored, and I could sense my children were the same. So instead of doing the normal routine this weekend I proposed a trip to Hastings on Sunday instead. Naturally they all said no..... as if.

Now we've not been to hastings for a good few years, probably six. This for good reason; Hastings was always a crappy little dump. The beach for the main part was a car park and the town listless, with little of interest unless you were a drunk with a scraggy dog to heel. It always seems to rain there, as it did today. But not having been back for a few years I wanted to see it again - having kids means we now focus on beach rather than town activities. Also I guess one other reason we stopped was the rather tedious drive down the A21, which could take hours.

So we set off without much hope really. But the A21 has changed - there are now substantial sections of dual carriageway, and the journey down was OK at 90 minutes. [When you live in London you stop looking at how far places are, but instead how long the journey takes.] But by heck the biggest change was to the town itself. The fishermans huts have been cut down in number and now sit under the East cliff in a very trendy and more focused manner. I've never seen so much tweed clothing and children called Tarquin in one spot. There was even a bike shop in the town selling urban single speed cruisers. The majority of the huts have been replaced by an art gallery, which seems the defacto manner of investing in crappy little seaside towns now. And indeed if they all work as well as Hastings or Llandudno has, then why not do it? The gallery was shut but there was a certain livliness to the area - one suspects the summer months get really busy.

We didn't do very much as the weather was dire - even the attendant on the funicular stopped us going up as she said we'd just get blown away at the top. How lovely was that of her? Indeed the whole town was alarmingly friendly and we got the impression that the locals are now once again proud to live there. We were quite taken in - indeed the whole time there I only saw the one drunk. I suspect he was employed as some sort of historical reference by the council. A bit like a town cryer. We found the Cheese House and the Heritage guest house, which thanks to Trip Advisor looked very forlorne. Somehow it pleased me to have found it.

Really one must make a special note of the weather. It rained. It snowed a little, and I believe at one point hail was on order. Overall it just rained; a lot. Horizontally. My kids froze and demanded we leave. Yet strangely both my wife and I were quite happy to stroll about. A beach is a wonderful place in a storm isn't it? And I must say when away from the fishing boats how clean the beach seemed. Good on you Hastings town council.

The whole town reminded me of those traditional seaside places you get in France. But here Hastings trumped them in that the streets were not covered in dog shit. Go to any seaside town in France between, say, Calais and Nice and you spend the whole time either avoiding dog shit yourself, or wiping it off the kids' shoes as they say sorry, didn't see it in the manner kids have of not actually giving a toss. Indeed having spent the past twenty years trying to love the French seaside towns, I've failed alarmingly just due to the sheer volume of dog shit. Why can't the French sort that one out? I digress.

Lunch was had at Whites in George Street - usual £9 a head fish and chips, but with excellent service and we left wishing we'd had the rack of ribs which looked fantastic. For dessert we popped into Judges Bakery over on the High Street, which is owned by the Green and Black's chocolate founders. Now they win awards for their food here, but my wife and children couldn't eat the little cakes I'd bought for them so I'm kind of wondering what the awards were for? Possibly the bread as the cakes we'd not buy again, and as a cyclist I know a thing or two about cakes. 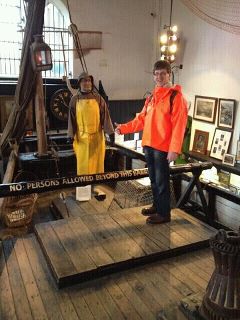 Rather loud fishing top.
﻿This image shows me in an oilskin jacket that I have. It's a bit, well, isn't it? I do know what you mean but in truth as a jacket for extreme wet weather it's brilliant. Dry and warm. My family hate it, and I'm pretty sure my matching it to a chunky arran sweater doesn't help with my mixing with the local fishermen..... In my defence I didn't buy it as I was given it as it is a works issue item for the extreme weather we get in, er, London. I don't even blend in with the fishermen alas; they just take the piss. As they should really.
The drive back was a typical Muddy Ground random affair using my internal sat nav system. My wife wanted me to drive along the coast a bit, but this got boring trundling past TKMaxx and endless carpet warehouses so we cut inland and just followed my nose really. I don't know that country but the road we found seemed to head North West ever so slightly, so I followed it for miles. Eventually it turned into the A272, which I know well from my motorbike days, as indeed should any motorbiker in the South. Bizarrely my random journey back also took 90 minutes. It did seem infinitely longer though, so I'd suggest the A21 every time - oh and I did spot the local mountain bikers using Bedgebury. "How so?" when the car park is way off the A21 I hear you cry. Well the car park costs £6 a day from memory - the locals just park on the A21 and ride back against the flow of traffic. They looked really muddy, which suggests they've found extensions to the Bedgebury loops.

So if you've nothing better to do one day and fancy a trip out that's not too far away, but don't fancy the hassle of Brighton or the elderlyness of Eastbourne or Worthing, why not give Hastings a go? It kind of sits somewhere between the two extremes really, but seems more honest than Brighton. It's certainly a better punt than Margate, which is really run down - that is unless you actually like 99p shops. Margate, bless, was actually also a very friendly place but a bit Redhill whereas Hastings was more Reigate if you see what I mean? OK I sound snobby, but what's the point of going for a day out as a treat and going somewhere down at heal? If I wanted to do that I'd go back to my home town of Wolverhampton.


Naturally our day out meant I missed a solo ride on one of the wettest days of the year so far [AD had to go over to Switzerland and stand around at the motorshow oogling Kylie in her underwear allegedly - tough call that one, eh?]. Now I do enjoy the wetter rides in a perverse way; man against the elements and all that. Looking at the local ride reports it sounded a good day to be out.
http://www.muddyground.com/﻿