February 03, 2012
I'm only vaguely familiar with these bikes, so apologies if I have the name wrong; Mundo, Mondo, whatever. Somehow they're like a Land Rover to me; hugely ugly but stil kind of cool due to being fundamentally utilitarian. This guy clearly has the edge. Spotted in Brixton near to Dulwich village. He was up a ladder so I didn't get a chance to speak to him. 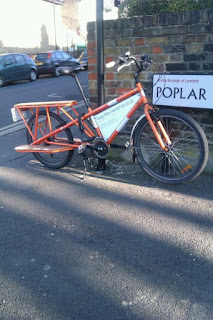 http://www.cargobikehandyman.co.uk/
﻿Note: I've never used him, have no idea what he looks like even. I'm not recommending him; indeed my day job specifically precludes me from doing so. I just like the bike and the idea. It's brilliant.