Oh dear. I bring you my retro bike, the Klein Mantra. 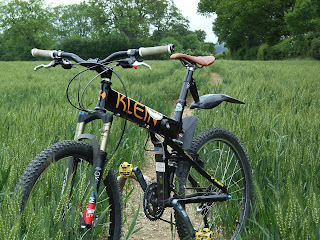 This folks is my Klein Mantra. I bought it new in 1997 for £1,500 - which was a lot of cash back then; something like £3,500 now. I used it as my main bike for eleven years, covering well over 20,000 miles all over the place; Scotland, Welsh trail centres, Belgium, and of course here in Surrey. I retired it in 2009 as I'd made up the Tassajara and Pace RC303 so had switched to them. I used it a few times in the past two years, thinking it still a wonderful bike.

Last year I went on a two day mountain biking course. Essentially it completely changed how I ride and move on the bike, bringing my style a little more up to date.

Today I had an hour to spare so took the Klein out for a jolly good retro spin out. I was looking forward to it! Jeans, t-shirt, no helmet, no Camelbak, nothing. Just me and my bike.

What a piece of shit it is. Honestly, it's virtually unrideable. I did about ten miles on it, and normally no matter how odd a bike is, you can get used to it by then. Not this one, not now. And I've upgraded it over the years; Magura Menja front forks, 2010 Shimano SLX front disc brake, smattering of Thomson stuff and so on.

Basically the bike is just too bloomin' long and you sit on top of it. It's also odd now having a disc front and a rim braked rear - when braking you have to conciously remind yourself that the two systems require different approaches. But it's the length that does it for me. The whole of the front wheel is way out in front - and yes, I know that it is supposed to be there, but you sit on the bike and can see the whole wheel right out there in the distance. It is in a different time zone. Indeed the whole bike exists a couple of minutes behind where you want to be. I tried riding at a slow modern pace and it was too much for the bike, especially with a rim brake.

And of course the rear shock is just a big spring with no dampening at all. It's quite alarming when the rear end of your bike threatens to throw you off on the rebound all the time. And by "throw off" I really mean that in a literal sense as a spring big enough to hold one's weight is also easily big and powerful enough to throw you off on the rebound. This it did with gay abandon on any bump. Note that the suspension design is such that it only works when the rider is seated - you stand, the bike acts like an hardtail. Back in the day when suspension was relatively new this seemed like a good compromise, but now it's just a liability. The bike does not work well when you stand up as per more modern styles of riding, so you have to sit on it to get the shock to work. When you do that it bounces all over the place rather uncontrolled. One day in the Malverns it actually threw me off, and it threatened to do so today. It is very odd to be on a bike in the knowledge that should you mistreat it, it'll bite back quite nastily.

The Mantra was a wierd thing back in the day, being compared to a stink bug due to the way it jacked up under braking. This would change the head angle massively as the wheelbase lost a good 20cm instantly. What happens is that the front forks compress, and the rear shock extends, lifting the rear. As it had something like 130mm of rear wheel travel, as the bike lifted fully this travel was transfered to the wheelbase as a shortening. This never used to bother me, but now it is frightening. Coming down the newly graded path off Reigate hill was really awful. No brakes, when I did brake the bike went all over the shop, and that rear shock just seems to exist as a pogo. Normally that hill you go as fast as you can pedal, and still feel a wuss at the bottom. This time gravity was too much and I really wanted to massively scrub off speed. It just wasn't fun at all.

What a frankly awful bike.

With rose tinted glasses on I'd have convinced myself that two years ago I'd have been running down that hill on the same bike, happily getting into a two wheel drift on the corner at the junction. Indeed the guy I used to ride with would always ask how I got down so fast. But from memory I always took the smoother path down. The Klein would probably be as fast as any bike down there as it is essentially a road. But thinking about my rides, it's clear that for years I'd avoided any challenging routes. All smooth, slow bridleways. With the newer bikes I pretty much go anywhere. That run down Reigate Hill we've been doing full on for years, and moaned when they graded it - yet now on the Klein even the graded route is frightening.

I wonder what a proper, 2012 issue full susser would feel like?