The Magura Sugru hack and the chainstay bridge inner-tube mudguard.

January 29, 2012
The other day I took my kids for a walk up the hill on a snail hunt - you know, those big Roman ones we get around here. Anyway some oik had thrown an old inner tube into the bushes so I picked it up as rubbish to be disposed of correctly. But whilst carrying it around I got to thinking of how I could use it - the magazines are always harping on about inner-tube mudguards. On my PACE RC303 the chainstay-bridge fills up with mud, eventually to such an extent that it halts forward progress. Could I not make a mudguard to fit this location? So last night I did. It looks shit and my family thought I was a wierdo for doing it, although to be fair this type of thinking doesn't take much provocation.

So, today, muddy, how did it do? Well, it 'did' basically. The mud didn't fill the bridge up, and changing middle ring gears was enough to knock the tube and dislodge whatever mud stuck. And once the bike got a bit dirty it took some looking to notice my rather Heath Robinson approach to mud management.

I know, I know; I am but one step away from having a dog in a whicker basket, but what the heck, I'm happy ;¬) 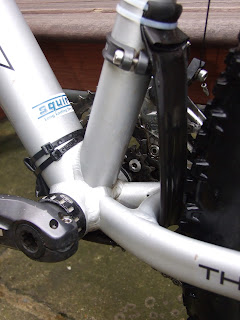 Now my second bit of thinking concerned the rather crappy Magura cover over where the hydraulic hose enters the handlebar unit at the resevoir. My LBS stated "this always happens, use some BluTak" but my kids monopolise that stuff. Instead I bought some Sugru and did a hack. OK I should have used black but the green was left over from fixing a Thunderbird..... It worked for the cover, and anyway who gives a toss what I do with my bike? There's no Gok Wan of the bike world out there. And quite frankly if there was he should be over at Box Hill talking to the roadies. Today there was a right old mix, all of them wearing overshoe foot warmer things. One had the temerity to wear all white, and had clearly put some socks down where his Man Bits are. Even without overshoes he'd have looked a twat, but today he was Twat Central. Has he not got a mom or mom figure in life to put him right? 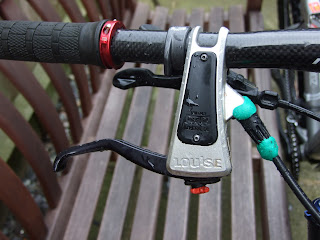