Zombie pets. How to design a t-shirt for mass production.

December 03, 2011
I've been toying with a zombie t-shirt for ages - an old friend from back in the day wanted one, and, well I thought it a bit passe, a bit overdone. But as is such with these things over two years I have kind of put one together. Who says that I'm a slow worker? Anyway, strike day and I'm here with the kids and wanted to show them how to design a t-shirt. So I finished off the zombie one as that's a horrid looking thing and kids love all that. Wife got home and couldn't even look at it.

So I contacted my printer for a quote and it should be here for January.

As usual I've taken a sideways look at it all and have not gone in for the blood and gore element. The red in this image will be the actual t-shirt colour. I guess it's similar to my Spannerfish variant shown on http://www.muddyground.com/ in that it doesn't actually make any sense. 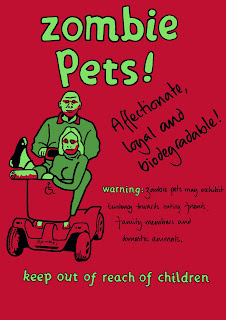 As is always the case with my images and text, the work is all my own. I use my own handwriting or trace around text in newspapers etc. that I find interesting and then adapt it. I don't like to use normal text. Here we have a mixture of my handwriting plus I traced out some characters from a child's writing set that I got from a toy shop. For my t-shirts I tend to find this simplicity works best - and bizarrely attracts professional designers like flies to poo. The drawings I tend to do in crayon, or sometimes I'll find photographs that I like, cut out the characters, manipulate them, then trace around them to get the final result.﻿ Here I took an image of a man on a scooter, then added in a fashion model but manipulated to fit into the basket. I've no training in art or design by the way, and what I do here is a million miles away from my day job.
Photoshop for me plays a very small part in what I do. The images I scan in then adjust their relative positions and size using photoshop, but that's it really. Photoshop bores me and takes up too much time - I can draw up the thing in minutes but spend hours moving the elements around afterwards. As for working out whether or not it will actually work as a t-shirt.... I don't. I just design it, prevaricate for months, then get them printed up regardless. So far only one has failed, but that one I only got three t-shirts printed up in.
As for my ideas, well I don't force the issue. I'll have an initial thought, and will draw it out very roughly. Then I'll leave it be but think about it, often for years. The zombie one for two, my spannerfish one for three. There's no rush really, not when it is a self-funded hobby like this is. The only design that I worked on was my map one, and that mainly because it was effectively an idea followed by months of technical drawing. Quite often a design may well present itself. For example I saw a guy with a t-shirt on and all it was, was a black triangle. Straight away I thought of putting a bike in profile within the triangle, adding a description plus some characters. From seeing the guy with the t-shirt, to submitting the design to my printer took an hour.