This is why I always give horses a wide berth. 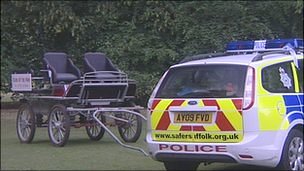 A woman has died after a horse hitched to a carriage bolted and crashed into spectators at an event in Bury St Edmunds, Suffolk.
Eight people were taken to hospital after the incident at the organised event in Nowton Park on Sunday.
A 57-year-old woman from Bury St Edmunds was taken to Addenbrooke's Hospital, Cambridge, but later died.
St Edmundsbury Borough Council chief executive Jeff Rivers said health and safety officers were investigating.
The other injured people were treated and later discharged from West Suffolk Hospital.
The council, which organised the event, said this was the first time it had organised the horse and carriage rides.
Mr Rivers said: "Unfortunately one of the horses, that wasn't actually being used at that time, was being held by a member of staff.
"But something happened so the horse took fright, bolted, went round the circuit it had traditionally done when it was giving rides, and then broke away from that and crashed right down the middle avenue where most people were."
'Everyone stunned'
Suffolk Police were contacted by the ambulance service just before 1630 BST. Police said more people may have made their own way to hospital.
Jon Kydd, who was in the park, said a woman screamed "look out" as a horse and carriage with no driver bolted towards him.
He said he quickly grabbed his children who had been playing in its path.
"Had we not moved them out of the way, they would have been hit," he added.
"We screamed as loud as we could for people to get out the way but one lady tried to move, but was too late.
"She looked like a rag doll - the horse, then the cart hit her at full speed. It was horrendous."
Hannah Vesty, who was with her two children, including her three-month-old son, said: "We heard someone shout 'get out of the way' and as we turned to look the horse charged right past us, trampling a greyhound dog.
"Incredibly, the dog got up after getting stuck under the wheel.
"It was shocking, everyone was stunned. We feel very lucky to have not been harmed."
Anyone who saw what happened is asked to call Suffolk Police.