Anyway, enough of the death of one of the worst terrorists the world has ever seen, you want to know how my third ride in four days went don't you?

Out on a solo spin as AD was having a Brazillian done, whatever that is, meaning I managed to leave a little earlier than planned. Cresting Colley hill the views were fantastic. I had to move over to avoid a group of girls, one of whom had her left breast hanging out, only to see that the wind of the past few days had blown the smog away and the views towards the South Downs were fantastic.

Dear Reader: "Sorry, what was that?"

MG: "The views? Stunning they were. Could see all the way to the coast."

MG: "Oh yes, that. Some girls doing the Duke of Edinburgh award scheme were strolling up Colley Hill. They were about 17 years old officer. One of them, for whatever reason, had her left breast fully out swinging in the breeze. She was a big chested girl, so it was indeed swinging away. Most pleasant to see but oddly unerotic - out of context you see. Don't expect naked breasts on the NDW."

Back to the ride report...

So I lie when I say it was an unexceptional ride. Solo or not, it was a blast and I had a great time. Certainly it's a rare old day to see a young woman ambling around the countryside with a yummy looking mammary exposed. I'd like to say I dreamt it all up, as my rides from now on will be a little disappointing surely not? I'll remember her forever. No doubt by the time I'm more addled than I already am, and well into my 70's dotage, the story would be that she was totally naked and we had rough humpy pumpy there and then. Bet you can't wait for that blog entry can you Dear Reader!

Hardly any cyclists or horsists about so I could ride as I pleased. On Saturday myself and AD had commented that the normally muddy path alongside the M25 may be fun as a piece of flowing singletrack if tackled east to west, so today I tried. I can report that it is. Normally it's pure slog as it is always waterlogged; indeed I've never seen the path dry. Today it was just lovely. Well I lie; I only did half of it as I took the naughty emergent path to the right instead as it is a bit more twisty.

Taking this meant Headley Heath as my destination, and so Secret Singletrack as I didn't fancy Box Hill (decorating to do y'see) which was also lovely and fast flowing. No Ranger to tell me off either. Going down was fun (isn't it always missus!) but the climb back was made worse by those bloomin' hover flies. I breathed one in. Yeuck. Now short of killing myself, having an autopsy and then publishing the taxonomy report post-mortem in order to show what they looked like, I took a photograph of one of the blighters. Much easier to do and less messy. This photographic activity looked really odd to some walkers passing by, but hey, I'm an investigative mountain biker on a mission so sod off! Interestingly they were dressed in all the gear - I've seen people less well prepared up Ben Nevis in the winter. Do they know something?

N.B. I looked the flies up - St Marks Flies apparently. Live for a week, don't do much apart from mate. 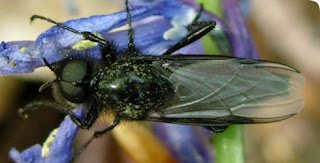 Going back the dust and wind made riding fun. I can't remember the trails ever being this dry. I also can't remember having ridden three times in a weekend, and doing 80 to 90 miles either. Bloomin' good cycling these days. If it wasn't for the 5cm deep dust on many of the corners I'd say run full slicks. My Aspen tyres are performing brilliantly though.

There was one big cautionary note though; the falling tree branches. The winds were gusting to pretty high speeds. When this happened every so often there would be a cracking noise, followed by a branch crashing to the ground. Most were small but every so often a large one would come down bringing a lot of debris with it.

Coming off Reigate Hill I decided to see if the two emergent dog walking paths could be linked together as a nice bit of singletrack. Yes they can is the answer. I'll not say where they are exactly, but they don't take too much finding. Give them a go if you're coming down the track. Off camber so dry days only?

My Pace continues to be a git. Still no idea what the noise is [sounds like a lose saddle, but isn't], the Pike forks still fail to give full travel no matter what I do, and the seatpost clamp has split so the seatpost drops all the time. Ordered a new one, but when was the last time you saw a clamp split away?