Rare Klein Mantra mountain bike spotted out in the wild. 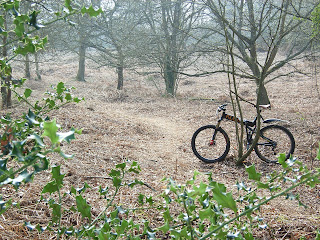 ﻿
﻿You have to get up early, and find yourself a suitable hide but sometimes it is worth it. Today, hiding in the bushes, this rare and oddly ugly mountain bike appeared on the secret singletrack out over at Headley Heath. Clearly here is a bike that has been upgraded over the years - 2009 Magura Menja forks and 2010 Shimano SLX front disk brake tell a tale. This old boy isn't going to give up now is he?
The fellow looks to be ancient - indeed he is being a 1997 vintage bike. 8 speed! When was the last time you saw that? Obviously here is a bike that's canny enough to survive the annual consumer cull whereby old is replaced by new.
A lovely and refreshing thing to see.
Now if you look at my recent ride report, you'll see that I pitched this bike against a new full suspension Specialized; a 2010 model that retails for £1,300 and has 120mm of matched travel. The magazines will have you believe that new bikes are always better, and old bikes are for bike geeks. Oh come on; it's the rider that counts most of the time. My 1997 Klein, with 100mm up front and a bouncy rear absolutely smoked the newer bike. I don't mean I got in front a little bit, I mean got so far in front on one twisty 200m section, that the guy on the other bike didn't know where I was anymore. The bike was probably having it's legs ridden off, but isn't that the point?
Don't discount these older bikes, especially if you generally ride solo. Sure you could buy an all singing, all dancing £6,000 bike at 0% finance over three years, but what are you actually gaining? Do your local trails warrant such a machine? Sure my Klein is out of it's depth most places, but it put the new £1,300 bike to shame. Before you splash the cash, look at what you actually need from a bike and then check the used listings out. You never know, you may get a decent used one for the price of a deposit on a new machine. OK you have to be a bit canny and know what you are buying, but a good bike ten years ago is still a good bike today.
Just don't buy a bike with a 1" quill stem or that uses rim brakes on the rear. That's a bit too old tech. You want the newer headset standard plus the ability to fit disc brakes, so check the wheels out - can you fit brake rotors? Why? Well cantilever or vee brakes are pants; utter waste of time. They never worked even back in the day. Plus there are an awful lot of lightly used decent quality suspension forks out there that you can fit that make all the difference. My Klein I updated with a set of 6 month old Magura Menja forks for £150. You can't do this with the 1" quill stems. Gears I'd not worry about. Running 8,9 or 10 speed gears often makes little difference to your own performance. My Klein is 8 speed and gave a bit away on the ups, but nothing anywhere else.
The older bikes will perhaps give away 20mm of suspension travel to the newer bikes at a given weight point, and may be 8 speed. The frame angles will be different, and you may notice this on the hills, but next month you'll have nothing going out of your bank account....
Of course you may end up buying a lemon that's been shagged to hell and back. Crashed frames, knackered forks, worn transmission; it's all out there for the taking. A ten year old bike may just be a pile of scrap. You have to be able to read between the lines of any advert, and be fairly mechanically astute in order to fix any problems. But boy is it fun smoking your mates on their £2k rigs on your eBay £500 special.....