In a fit of confidence I bought the bike prior to actually passing my bike test. Bit daft as a week before my test I had a big accident that ripped both knees apart and destroyed my bike. So I took the test in crutches [passed - on a borrowed bike] and collected the bike limping. I had to ride it home in a single gear as my leg locked into place on the bike.

So why did I like it? A fundamentally unreliable bike at that, one outclassed by just about everything. Well it took me to 18,000 miles worth of places in ten short months. I couldn't give a stuff about what I rode back then, so long as I got to places. And why was that? Because I was living in Snowdonia at the time and the travelling was good. Bored Saturday? Off to mid Wales for twisty roads, or to Wolverhampton for some cheap beer. Bored Sunday? Head towards Manchester. Bored after work? Over to Snowdon. For some odd reason I always ended up in Aberystwyth - add it all up and I've spent months in that place.

To think I sold it on a whim, bought a holiday and then a road cycle. The ten months went by in a blur of travelling and excess alcohol, but by heck was it fun. Never kept it long enough even for a new MoT. Mind you I did keep it long enough to boil two batteries thanks to dodgy rectifiers, rebuild the forks and fit a new headset, skim the head, and get through a few rear tyres. Oh and the ignition barrel fell apart, and chasing a Volvo 480 on the A55 at 110mph one day the rear shocks gave up on me and I had a massive tank slapper. The other thing that happened was that in deepest Wales one day I had to source and fit a new sump when the sump plug fell out on a bend - 200m of skid mark down the road that one.

But the biggie about half way through my owneship was when my mate Roger died in a motorcycle accident on his GSX-R1100. We were travelling back from Chester to Wolverhampton and were hacking along. He went to overtake a car just as it started to indicate right. He stood no chance and I had a grandstand view as I was perhaps 10m behind him at the time. When I got to him he was mush; alive but it was clear that it wouldn't be for long. About fifteen minutes. He'd gone forward into the tank and it had exploded his sternum, destroying every major organ he had. 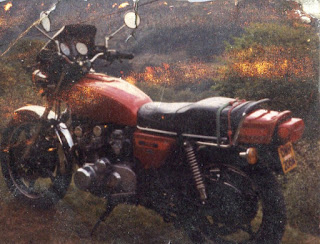