January 23, 2011
Happy little trip out today; I've still got lingering flu so didn't expect much, but four hours later had had an absolute blast. One of the more varied rides in a long time, and one of the most enjoyable. Initially a solo ride....
I wasn't solo for long as eventually AD made it out. I say eventually as he'd taken one of his famous shortcuts; a condensed ride that is actually three times longer than normal. Luckily I knew exactly where to find him.. for once. We compared ailments, and I won. Lingering flu, broken rib and a burst blood vessel in my eye. He just had some nonce problem with his elbow.

We did view lots of jodhpurs, but they were filled with old ladies legs and bums so not too nice.

Last week the RRP mudguard was a bit rubbish; catching more mud than it guarded. Anyway I turned it around and ran it in the reverse direction - bingo! It still lets a bit through, but none went onto my face - so no dog eggs for me this week. Bonus! 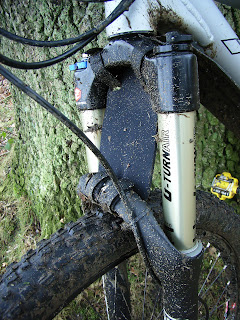 Did see another large group out from the Mole Valley, but they seemed to have nothing interesting to say for themselves so I let them ride onwards.