January 31, 2011
I've had a short play with this thing now, but unfortunately all indoors in an old church so hardly much of a test. I'd elected not to attach the flash - mainly 'cause I'm a bit stupid like that. To be honest I didn't expect much; I've had a digital SLR for years and indoors, no flash, is generally asking for trouble. Indeed anything above ISO400 is usually a no-no. But I'd not counted on the Nex-5 being fully workable at ISO1600. Most of my shots, although far from magazine quality, were actually good enough for Flickr.

So I'm happy with the Nex-5. Well, would be more so if cards didn't cost £50 and my PC would run the darn video. Also have you seen the prices of Sony accessories? £12 for a screen cover?

Would I suggest that you, Dear Reader, buy one? Perhaps not. To be honest it's only just easier [with the 18-70mm lens] to carry around than a full on DSLR, so if you want interchangeable lenses why not buy a bigger camera instead and get a little extra quality and better lens choice? If you want something to go in your pocket, then get the Canon G12. However, if you don't want to be an SLR bore, and are happy with the kit lens, but want something that'll fit into your glovebox or work bag, that's unobtrusive in use and looks modern, or that can be used by the family on full auto mode, then these new mirrorless cameras are very, very good. In many respects they are a bit of a no-brainer; you don't look like an enthusiast, so people don't expect much of you, yet the results are as good as mid-price DSLR's of a few years back. Just don't mention the Canon G12.....

8/2/2011: Update. Bought a bit of a pup I think. Outdoors it works well enough, and is pretty clever, although not as sharp as one is led to believe. Indoors, with the flash, it is utter crap and somewhat embarassing. People know you've splashed over £400 on a camera, so expect goodness from it. If you need to use the flash, then go use another camera I say as otherwise you are wasting your time. Colours come out a bit too bright and red eye is a serious issue. Indeed the red eye problem is so great that I binned every single photograph taken of a childs 5th birthday the other day. The flash works well as a fill-in for daylight photography, but when the camera starts to rely upon it for indoor photography it all goes wibbly.

10/2/2011: Update to the update! After reading the manual I've finally found out that there is a red-eye reduction function. It's buried deep within the options rather being on the thumb wheel when you attach the flash. How dumb is that? 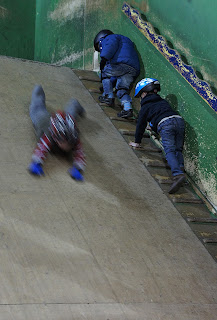 This was taken hand-held at ISO1600