January 18, 2011
Well folks I've done it; I've signed off on yet another t-shirt - my map of the famous Surrey singletrack yet done in the wonderfully simple style of a London Underground map. Except here instead of locations such as Victoria or Brixton, I have much nicer ones such as Leith Hill, Dorking or Westerham. My tag line is: World Class Singletrack. Got to be good!

It's a pretty simple design, and like the original Underground map it bears no physical relationship to the actual locations of the stations. I've taken a risk in putting bike shop locations on to it - with this recession who knows what'll be there next week! The t-shirt design follows an imaginary route around the North Downs from Newland's Corner to Box Hill and back again via Leith Hill, Coldharbour and Peaslake.

No idea when they'll be ready, but be sure to watch this space as I'll post the arrival date here. It shouldn't be too long a wait as my printer has got to work on the screens already. I've gone for the blue base, but I've also asked for some random coloured samples to see how it works on, say, a sweat top in aged black. There's also the distinct possibility of my ressurecting the original, more complex design, but as a mug. That'd be brilliant if I could do it cheap but well enough; my prototype came in at £12 and was very indestinct.

Over the coming week's I'll post some original design drawings so that my process of idea to production may be understood. Generally I'll have an idea in Starbucks, draw it on a scrap of paper, then neaten it up at home. Usually they're quicker than this one - this has been brewing for a year now.

There's already some interest around these t's, which is fun. Oddly enough my more specialist t-shirts sell better than the generalist ones - I'd have thought it'd be the other way around, but then I'm no businessman. My Surrey Hills one has gone to every continent bar Antarctica. I love the notion that some guy called Leith is wearing one of my t-shirts in Colorado, or that there is a guide working the biking trails in Southern France with a t-shirt bearing Col d'Box on it. 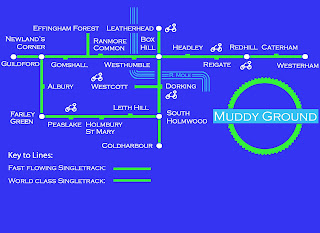